Coaching is a profession of love. You can't coach people unless you love them.
-- Eddie Robinson
Hershey Blaze coaches come from all types of backgrounds here in the Central PA area. While our track and field abilities vary- the main goal is to provide a fun & safe environment for the children to enjoy this great sport while competing at a high level. All HBTC coaches are registered United States Track & Field(USATF) coaches and some have children competing in the club. We are truly a family environment.

HBTC coaches are also recreational athletes who run in various 5K's, half marathons and marathons. We don't just talk the talk...we are examples!! We're always looking for additional help & expertise with our youth. If you'd like to volunteer your time and become a coach with Hershey Blaze please contact us at hersheyyouthtc@gmail.com.

Alan Paynter was inspired to form the Hershey Blaze Track Club by his own personal childhood experience with the Cinnaminson Track Club in NJ. By the time he and his wife settled in Central Pennsylvania and had their own children who wanted to run track  they learned there was nothing in the area. So they entered meets as unattached runners and competed alone for a number of years. With the support and addition of a few other families in the spring of 2013, all of that changed. The Hershey Blaze Track Club was born!

Coach Paynter was a  sprinter and football player at Lenape High School in South Jersey and earned a scholarship to the West Virginia Wesleyan College and later transferred to Kutztown University to play football.  Upon graduation from college Coach Paynter accepted an assistant football and Head Boys & Girls Track Coach position at Central Catholic High School in Reading, Pa and Mechanicsburg Area High School. His high school athletes have gone on to earn more than 50 District & State medals and have become some the most successful track & field athletes in the Pennsylvania.

Professionally, Coach Paynter has been a college admissions professional for over 20 years and currently is the Director of Admissions at Hobart & William Smith Colleges. He is a sought after speaker and educator on college admissions topics and trends as well as overcoming adversity. Alan is a member of Iota Phi Theta, Fraternity, Inc., enjoys exercise and fitness as well as riding his bike. He has already completed several marathons and half marathons and soon taking on triathlons. 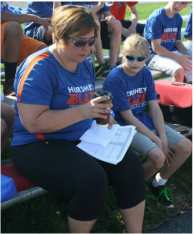 Jennifer Paynter- Hershey
Head Club Administrator/ Co-Founder
Jennifer is often referred to as "the glue that keeps the club together and running". She is responsible for most of the day to day organization of the club as well as being the parent of 3 standout athletes. As a child, Jennifer herself was a multi-sport athlete from the Big Spring School District in Newville, PA. Her athletic talent as a defensive back in Field Hockey landed her a scholarship to play for the Kutztown University Golden Bears. It was during their college years when she and Coach Paynter met. As athletes, they often spent time working out together in the off season.

​Jennifer is an at home mom and also the owner of Perfectly Paynted by Jennifer. She produces some of the best custom cupcakes and cakes one could ask for. Her baking has long been one of her greatest talents known by all. But it is the care, dedication and passion that she puts into that business that also fuels the Hershey Blaze Track Club. 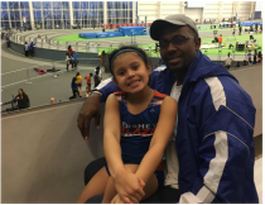 Kutztown Univeristy is where Coaches Mobley and Paynter developed a friendship. This is where he and his wife Chrissy also met. They are the parents of two amazing young athletes- one of which run for Hershey Blaze Track Club. As much as our coaches bring athletic experience to the sport our true goal is to model lifelong dedication and friendship for our athletes. As a result of this renewed bond between these coaches the Hershey Blaze Track Club is launching its Blaze KOP site in the summer 2016. Together with the Paynters, the Mobley family are dedicated to growing this site as a testament to the great success of the Hershey Blaze Track Club and making the organization a national power. Coach Kathleen Dornes
Lebanon County Site Director
Jumps/Relays
Coach Dornes is a Lebanon County native and a graduate of ELCO school district and Susquehanna University. She ran track for 12 years, competing in the sprints and relays. Coach Dornes has been an assistant track and field coach for Lebanon School District for the past 7 seasons where she coaches the jumps and 4x1 teams.
Coach Dornes has coached 3 school record holders, 3 PIAA district 3 qualifiers, a league champion, a league runner up, a 3 time county champion, and a 2015 Junior Olympics qualifier in her time with Lebanon. Coach Robinson is a seasoned track and field and XC coach. He has coached at several different levels throughout his coaching career. Coach Robinson is currently the head XC coach at Thaddeus Stevens College of Technology. Coach Robinson loves track and has for as long as he can remember. The passion he has for running is the same passion he has for coaching. Coach Robinson’s favorite part of track is knowing that he made a difference and an impact with his athletes!!
Coach Robinson’s XC team has won their league for the last 2 seasons, was 2nd in their regional meet, and placed 8th overall at Nationals. At the high school level, he has coached a Lancaster-Lebanon league champion, a PIAA district 3 medalist, and a PIAA state medalist.